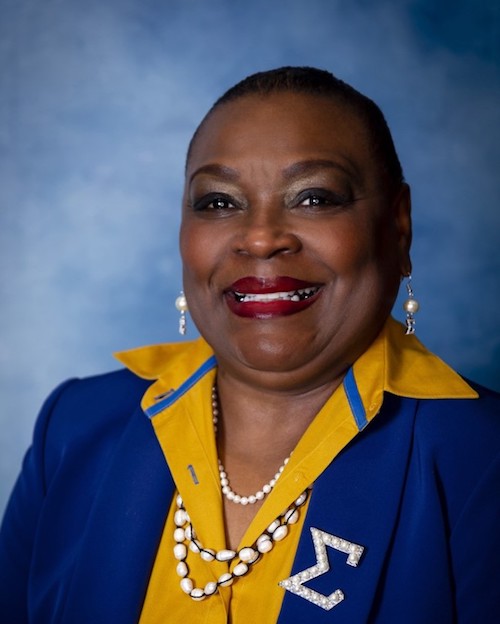 This Women’s History Month, we would like to introduce you to our new Associate Director of Operations: Jerrilynn Freelon 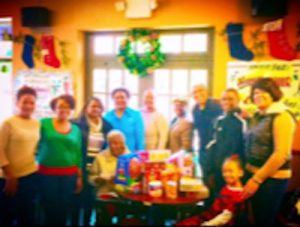 Jerrilynn with her mother and Board Member, Monique Graham at a Toy & Food Drive for House of Peace, sponsored by the National Black MBA Association and NAAAHR.

Our Associate Director of Operations, Jerrilynn Freelon, embodies everything we think of when we think of a “community builder” — someone who supports her community and the people in it.

Jerrilynn’s story of community building in Milwaukee reaches back more than 40 years. During that time, she’s been a teacher, leader, coach, mentor, advocate, philanthropist and professional. Because of her experiences, she’s also what our Lindsay Heights neighbors would call a “cultural pioneer.” In honor of Women’s History Month, we wanted to share Jerrilynn’s story and how she’s paved the way for professionals, women, and children of color in her professional and philanthropic endeavors.

A legacy of leadership

After graduating from Alcorn State University in Alcorn, Mississippi with a degree in Economics and Business Management, Jerrilynn joined her family in Milwaukee. 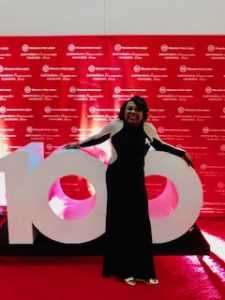 She joined Northwestern Mutual in 1980 and worked closely with the financial company’s sales force before becoming interested in technology.

“It was the era of the personal computer, so I took some programming classes at MATC and became a Systems Analyst,” she says. Soon after, she moved into an HR-focused role — supporting sales managers in recruiting and developing their sales staff. “At the time, this division was very male-dominated, and wasn’t very accessible to people of color.” Jerrilynn says. “I was the first African-American to do that work. “

From there, Jerrilynn’s trajectory at Northwestern Mutual always had a focus on diversity, especially when it came to increasing diversity in the company’s recruiting, hiring, and promoting. “We had an affirmative action plan in place, but the idea of recruiting and developing people of color was really foreign within the organization,” she says. “These conversations were starting to happen in the early-to-mid ‘90s. I didn’t want the company to find itself in a position where they were playing catch up 20 years from now when it came to diversity and inclusion.”

Paving the way for more diversity

She served on the company’s first Diversity Committee — a foundational committee at Northwestern Mutual where she and a group of employees and leaders discussed how to make the corporate headquarters and the field offices more representative of the population they were recruiting. From there, Jerrilynn applied for — and was hired as — the company’s first Diversity Consultant in the company’s Human Resources department. “Northwestern Mutual is a financial services company — so we approached our goal of more diverse hiring with data,” she said. “We would meet with company leaders, show them what their numbers looked like from a diversity standpoint, and we compared those numbers to what we knew about Milwaukee. That helped us open the conversation and talk about how desirable it is to have a workforce that mirrors our city’s population and demographics.”

Relationships and giving back 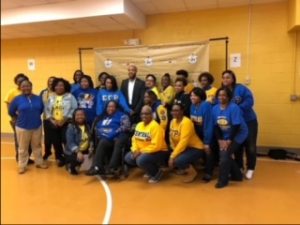 When Jerrilynn talks about her time at Northwestern Mutual, she’s quick to note that she was able to do this kind of work because of the strong relationships she forged there. “I had built a lot of wonderful, natural relationships — with the executives, with the President of the organization,” she says. “I was able to create a really strong development program for employees of color. We started a company-wide mentoring program. That work was important to me — I wanted there to be goals and plans for high-potential employees.”

Parallel to her professional work, Jerrilynn found the time to give back to her community. She is an award-winning YMCA Adult Achiever, and her class of Adult Achievers started the Black College Tour in 1990 to encourage high school students to explore Historically Black Colleges and Universities as an educational option. She is a proud member of the Gamma Pi Sigma Alumnae Chapter of Sigma Gamma Rho, where she’s been a member for over 40 years. As part of her sorority involvement, she works with the Rhoer Club, a group devoted to mentor and developing leadership skills in girls ages 12-18.

The start of something at Walnut Way

Shortly before her retirement from Northwestern Mutual, Jerrilynn met Antonio Butts, Walnut Way’s Executive Director, through a mutual close friend and mentor. She started to learn some symmetries between her own community building and Walnut Way. “One of the community service projects I had been involved in was helping to build a house with Habitat for Humanity, and I realized that house had been part of the Walnut Way community,” Jerrilynn says. “We had a conversation, and I left the door open — saying if there was ever anything I could do to support him or the organization, to let me know.”

Jerrilynn’s daughter, pictured left, who was the president of the Rhoer Club.

The door opened a month later, when Jerrilynn and Walnut Way Board Member Monique Graham attended a luncheon to honor mutual friend and Board Member Heidi Moore. She and Monique had met when they collaborated on a toy and food drive for House of Peace when Jerrilynn was President of the Milwaukee Chapter of the National Black MBA Association.

“I was preparing to retire from Northwestern Mutual at the time, and I shared that with Monique,” she says. “Monique said, ‘My goodness — do I have an assignment for you.’” Being on the board at Walnut Way appealed to her — she had served on other nonprofit boards and had certainly done a lot of work in the Milwaukee community, so she submitted her resume, talked with the Board Chair, and went on to serve a three-year term.

During that time, Jerrilynn worked closely with Antonio and the Walnut Way team on key leadership and HR projects, She started to see that the organization was “punching way above their weight.” “The new Innovation and Wellness Commons, the Community Wealth-Building Campaign, the Financial Literacy classes — there’s just so much that the organization is doing, and we’re doing it with just a handful of employees,” Jerrilynn says. “When the Board of Directors started talking to me about a potential Associate Director position, I knew I wanted to take on the role.” At that point, Walnut Way had just built out Phase I of the Commons and was starting on the second. “I wanted to play an even bigger part in bringing these resources to our community.”

“Working at a nonprofit was actually part of a 15-year plan for me,” Jerrilynn says. “It was a long-term goal for after I retired. When I was at Northwestern Mutual, I worked on a leadership development project, and one of the women we hired had come from the nonprofit world. She would always talk about how fulfilling her work was at the nonprofit — not that her current work wasn’t fulfilling, but she loved nonprofit work because it was instant gratification. She could see impact immediately. “I started to think about retirement, and how that was what I wanted to do. I wanted to bring my skills and talents to a place like Walnut Way and be able to share.”

Looking ahead to a bright future 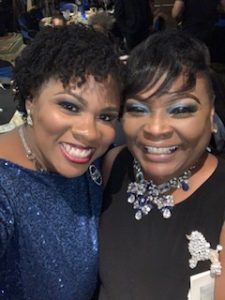 Jerrilynn with Rasheeda S. Liberty, who she coached and mentored as a student at Marquette University early in her career.

Jerrilynn says there’s fantastic work being done at Walnut Way in the present — and the future looks even brighter. “One of the great aspects of Walnut Way is the programming. We’re looking at programming and investment through a lens of community wealth building and creating healthier lives — and bringing everyone along for the ride and ensuring they have what they need to be successful.” One of her goals in her role is to make sure the organization’s measuring that profound impact. “When you can show the impact you’re having in the community you work and live in, that’s when you have an even more robust story,” she says.

When you ask why it’s so important to empower women — especially women of color — in her community, Jerrilynn is quick to answer. “We all have our natural talents and abilities, and as women, we can offer so much,” she says. “If we have the resources we need — the courage, the confidence, and someone saying to us that they believe in us, we’re able to step out of our comfort zones and try new things. That’s been one of the things I’ve focused on during my career — and I want to provide that opportunity for other women.”